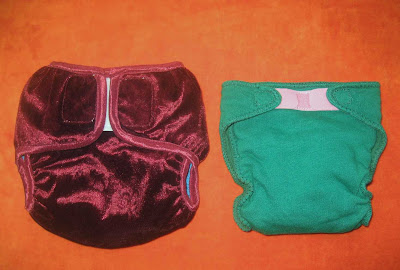 Finally! The first cloth diaper I've ever sewn! I used the free Mamabird pattern for this one, size newborn, and it's so tiny I think it might even work for a (not so small) preemie. The cover seems to fit nicely over it, and is by Meghan Wyant's free pattern, size small. The idea of using cloth for our second baby actually began to take shape a long time ago, when I was slowly getting bugged by the HUGE load of disposable diapers needed for just one (!) child. The need to go to the store to get them, the loads of waste and the cost all seemed to bother me more and more. Maybe I am getting more crunchy with age ;)) or it could have been this essay by Siobhan that appealed greatly to my imagination. Then there was also my enormous stash of fabric scraps in every possible colour.... yum! Something new to try out!!! Something to recycle, woohoo!!! Luckily I inherited a pile of plain white fitteds from my dear sister that will surely get us through at first, but in the long run I'm set on trying many different models, and maybe ultimately modifying some pattern for the perfect fit... But that is still miles away. In searching the net I found many great sites on the subject, of which Oz Cloth Nappies is one of the most resourceful (IMHO). Let me know what you think!
Posted by Suzy at Sunday, May 13, 2007 4 comments:
Labels: baby clothes, preemie, recycling 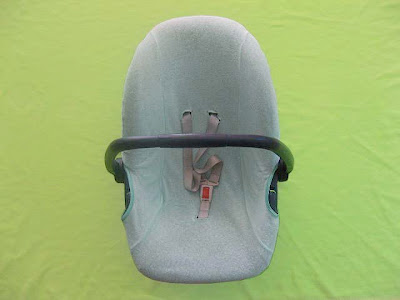 How time flies when you're busy! These past few months I've been sewing a lot for the new one on the way, so no time for interesting experiments, alas! My latest accomplishment might also be quite boring to some of you: a stretch terry car seat cover. The look and touch of the original fabric I never liked, and as our new babe will have to be transported in it all summer long, I figured I might as well try and make a cover that's washable, soft, and comfortable when it's hot outside. So I just traced the thing, used thin elastic for fitting it on the car seat, and fold over elastic to finish the sides where the seat belt goes. To my surprise it was really a piece of cake: it took me only an hour or so to finish. Those of you that use a Maxi Cosy of the same model: feel free to ask for the pattern.

Edit: Dear Sarah, and those that have asked me for the pattern: the MC I had would by now classify as antique, since it's probably 14 years old now (I inherited it from my sister, and later gave it to a friend that gave it to a friend and so on...)
so my pattern would probably be of no use to anyone anymore. But in short, here's the working description to make one yourself, if you can sew it's really not hard to do.
Take the cover of your MC, and pay attention to how the elastic bands are fastening the cover to the plastic hooks in the seat (if it looks complicated, take a photo, so you'll have it for reference later).
Take a piece of waste cloth, woven, like an old blanket f.e. or some thick transparent plastic foil and pin it to the subsequent pieces the original cover is made of. Do this separately for each piece. In my case the cover had a middle part with three holes in it and two side parts. Trace the outline of the seams and the holes for the belts with a ballpoint or marker on your fabric. Use these as a pattern and cut from stretch terry, adding seam allowances for the inner seams and almost none for the outlines. Don't cut out holes in the middle piece, mere slits will give you a big enough hole already. Stitch pattern pieces to one another, and finish the outer edge, and the inner edge of the holes with fold over elastic. You'll probably need to add some loops of elastic band to attach the cover (it goes OVER the original) to the seat. Pay attention when taking out the belts, if needed take photographs, so you don't have to re-invent how to reassemble them (don't ask me how I know... :)
You can do this. And stretch terry is very forgiving, believe me. Good luck!
Posted by Suzy at Friday, May 04, 2007 6 comments:
Labels: baby equipment
Newer Posts Older Posts Home
Subscribe to: Posts (Atom)