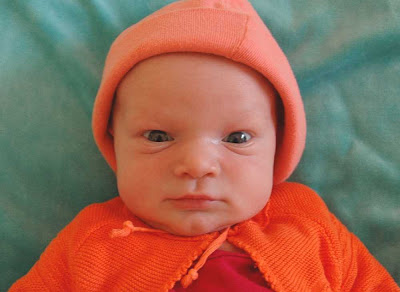 Now here was something I desperately wanted to try: to give birth to my second child the way my body was made to do. My first birthing experience wasn't too good. Our peaceful homebirth got all messed up. A cascade of interventions (all done in my best interest, yeah sure...) led to an emergency CS 24 hours later, and my sweet little girl I didn't get to hold or even touch the first few lonely hours after they stitched me up. I was grinding my teeth all through this second pregnancy, doing lots of research on VBAC and finding out how this happens to countless women around the globe. Visiting the pregnancy and birth forum at MDC almost every day, I became very well informed on the subject. So when my OB suggested we'd plan for an ERC at 38 weeks gestation, I freaked out. Because my scar didn't heal at all well at the time, she was afraid VBAC would be too risky, maybe even holding a 10% chance for rupture during labor. Eek!!! We asked for a compromise: doing an ultrasound of the lower uterine segment at 32 and again at 38 weeks, to see where we'd stand, and decide from there. And so we did: at 38 weeks I measured 4,4 mm, which is way beyond the cut-off (3,5 mm) most studies state as 'safe'. The deal was on!
We wrote a very clear birth plan, mainly stating that I wanted to be left alone, no drugs, no interventions whatsoever, and no staff in my room except for the (hospital) midwife. In return we agreed to constant EFM (external monitoring only) and promised to show up in hospital as soon as contractions were coming 5 minutes apart for over an hour. Now that was the nerve wrecking part. I knew that I would probably not be dilated much by then, but would need to maintain my calm to make any progress. And sure enough, contractions petered out once I set foot in that hospital room. Grrrrr! I don't exactly remember how I regained my confidence, but after three hours I was able to concentrate again, and things went smoothly from there. We called my acupuncturist and she came over to do some needlework on me. Contractions became much more intense right away, and as I was on the monitor, the midwife came running right in to find out what was going on. She never saw an acupuncturist at work before, and was quite puzzled by the obvious result :)) When the midwife came to check on me a few hours later, I couldn't believe my ears: 9 cm!! It was going to happen! My body did great! Then my bag of waters kind of exploded (really impressive that was, ha ha) and after 12 hours of labour, I was ready to push. Our Lucie was born easily: three pushes was all it took. They placed her on my belly right away, and three hours later we were home!!!
In retrospect I'm really thankful that my OB treated us so respectfully, thinking with me and not for me. And I'm delighted our birth plan was followed to the last detail. Who would have thought this was possible: same hospital, totally different birthing experience!!!
Posted by Suzy at Tuesday, June 26, 2007 6 comments:
Labels: birth
Newer Posts Older Posts Home
Subscribe to: Posts (Atom)