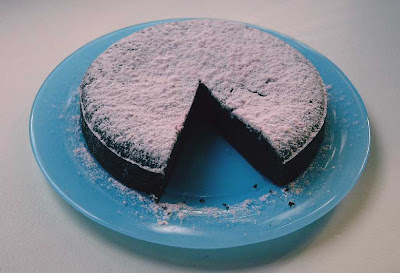 I had already been wondering for some time if Lucie had some kind of food sensitivity. She never yet managed to sleep through the night, and not because she didn't try, but because her intestines where troubling her (or that's what my observations where, she cannot tell yet, poor dear). The aftermath of her first birthday (she woke up screaming, at least 12 times that night) left me convinced. She had always been such an sweet and easy child, and her frequent colds nor her first four teeth coming through had influenced her cheerful mood. But something in her food had. Of late she had become increasingly irritable, her appetite dwindled and she had gotten so restless and hyperactive she resembled a human bouncing ball. I turned to my invaluable Mothering Dot Commune to look for clues, and the allergy board provided some enlightening information on the subject. What if Lucie's digestive system didn't agree with wheat/gluten, eggs or diary? She had hardly been interested in eating any solids until 10 months of age, and that exhausting night it finally dawned on me that her foul mood and colicky behaviour had also started -and gotten worse and worse- over those exact two months, just as her intake of solids had increased little by little. She still nursed a lot and wasn't eating anything fancy: some 'safe' fresh fruits and vegetables, potatoes, bread and occasionally a little plain yogurt. But at her first birthday she had enjoyed rather a large piece of her birthday cake, and when I came to think of it: all three suspicious foods were in there: wheat, eggs and diary. Obviously we needed to get to the bottom of this. I would keep her gluten free, egg free and diary free for some weeks and see what happened, and then one by one introduce them again. She improved quit a bit the first few days: night wakings were reduced by some 80%, and her mood cleared up immensely. After 4 days we experienced a setback that seemed to last and last, and I reckoned that since breast milk is still a major part of her diet, I'd better go gluten free too. Anything to resolve this, and get some sleep! And then the miracle happened. She only woke up once or twice a night to nurse, rolled over contentedly and slept on!!! When we cautiously re-introduced eggs: nothing happened. We also found out she can have hard cheese, plus lactose free milk. So: dairy is in, gluten is out. Over the past 6 months we've been busy getting used to our new gluten free life and although we had many a setback, once we got the hang of it gluten is no longer the party pooper at our house ;-)
Which has left me with a new challenge: gluten free baking! I'll be posting links to some real fabulous recipes I tried, but for now here's a pic of my first try at a flourless chocolate cake. This recipe is found at: thirtyfivebythirtyfive.blogspot.com Baking it, sad thoughts of a life-long diet made way for shiny new horizons: there are thousands of recipes out there, just waiting to be tried (and/or modified)!
Our sweet Lucie is going to eat well, and her home will smell of freshly baked goodies ever so often!
Posted by Suzy at Friday, June 27, 2008 2 comments:
Labels: baking 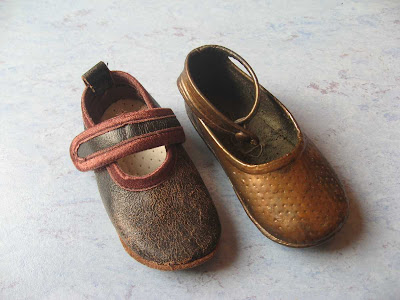 While Laura (cautious as always) is learning to ride a bike, Lucie is practicing her first steps. She's a tough cookie, that little one: never without bruises or scratches and never, E V E R giving up if she's set her mind on something! I figured it would be wise to make her some soft-soled shoes, to protect her little feet a bit. My mom had my first pair of shoes bronzed, and I thought I'd try to make a replica, using Mark Jenkins' cling foil and sticky tape method to derive a pattern. To make a long story short: the pattern turned out very accurate, so this technique is a marvellous tool if you are into shoe-making and want to copy a favourite pair. The trial shoe (I had made only one) proved two sizes too big, and it took me two more efforts to adapt the pattern so it fits her. To my surprise she seems to like wearing them, because when I took them off, she immediately grabbed them and had me put them back on!!! My guess is that she'll outgrow them in two or three weeks, but that's OK, I'd love to make her another pair ;-))
Posted by Suzy at Sunday, June 08, 2008 3 comments:
Labels: baby shoes
Newer Posts Older Posts Home
Subscribe to: Posts (Atom)