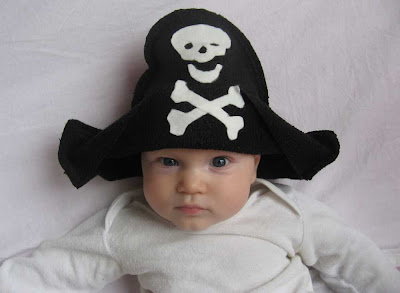 My little sister recently gave birth to a little boy, named Flint. That name rang a bell somewhere... Suddenly I remembered the TV-series I watched years ago on German television: Robert Louis Stevenson's Treasure Island. I enjoyed it very much, but when I hired a copy of the Walt Disney version sometime after that, I was sorely disappointed: it didn't come close! We're talking 1994 here, no Internet yet, I didn't even own a computer at the time... I knew of no way to get hold of that film. My enthusiasm instantly revived, I did a Google image search for 'Jim Hawkins' and recognised *my* film at once. It proved to be a French/German co-production: Die Schatzinsel (L'ile au trésor). Amazon.de carries it, so I ordered a copy right away. Arrrrr!!!! Anticipating it's arrival with delight, I made this hat for the newborn pirate (here modeled by my sweet and patient DD). It's loosely based on a tutorial at Tomlitoo, but done in fleece instead of paper.
For those of you that love the book and would like to read a few passages: Dead Men Tell No Tales offers the complete novel online for free, and sells tons of delightful pirate goodies too.
Posted by Suzy at Wednesday, September 26, 2007 No comments:
Labels: baby clothes, books, crafting with kids, movies 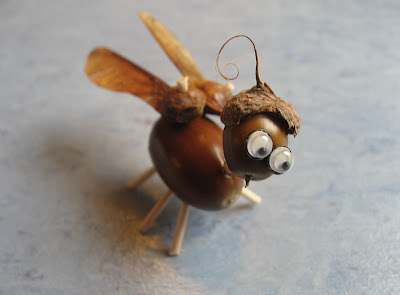 How to amuse an -almost- three year old when it's raining AGAIN? The enormous amount of chestnuts in our garden prompted me to do a quick internet search. At Tête à modeler I found a tutorial for a cute little animal. Inka Grebner has some good suggestions too. I came up with this little bug; now ain't he sweet?
Posted by Suzy at Tuesday, September 25, 2007 No comments:
Labels: crafting with kids 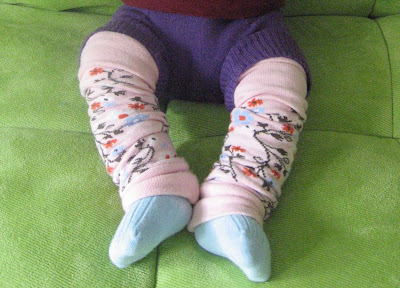 It comes as no surprise that having a new baby in the house has kept me very busy. What spare time I had left those past ten weeks, went into sewing diapers and covers in all kinds of colours. I had previously made a number of different waterproof diaper covers to find the best fit, they did turn out gorgeous, but... I ended up liking none of them for the red marks they leave on my babe's tender skin. I like the felted wool covers much better (in the picture Lucie is wearing a triangle style felted wool cover, how to make those I learned at borntolove.com and Bright New Baby) and in addition I whipped up a bunch of fleece covers, using Stacey's method to draw a pattern. I also tried various kinds of diaper patterns, and for Lucie's slender thighs, Shar's version of Wee Weka Side Snap pocket adjusted to a NB size had the perfect fit. I left out the snaps and the Velcro though, as I prefer using Meghan Wyant's Velcro closer, which allows me to toss the dipes in the washing machine without having to bother about the Velcro tabs.
So far the only really new thing I've been able to try is making these baby leg warmers. I made them out of children's tights, as they appear to come much cheaper than ladies knee socks ;)) How to make them is shown by Baby Hopes. Can you believe we needed leg warmers in august this year!?!
Posted by Suzy at Sunday, September 02, 2007 1 comment:
Labels: baby clothes, recycling
Newer Posts Older Posts Home
Subscribe to: Posts (Atom)